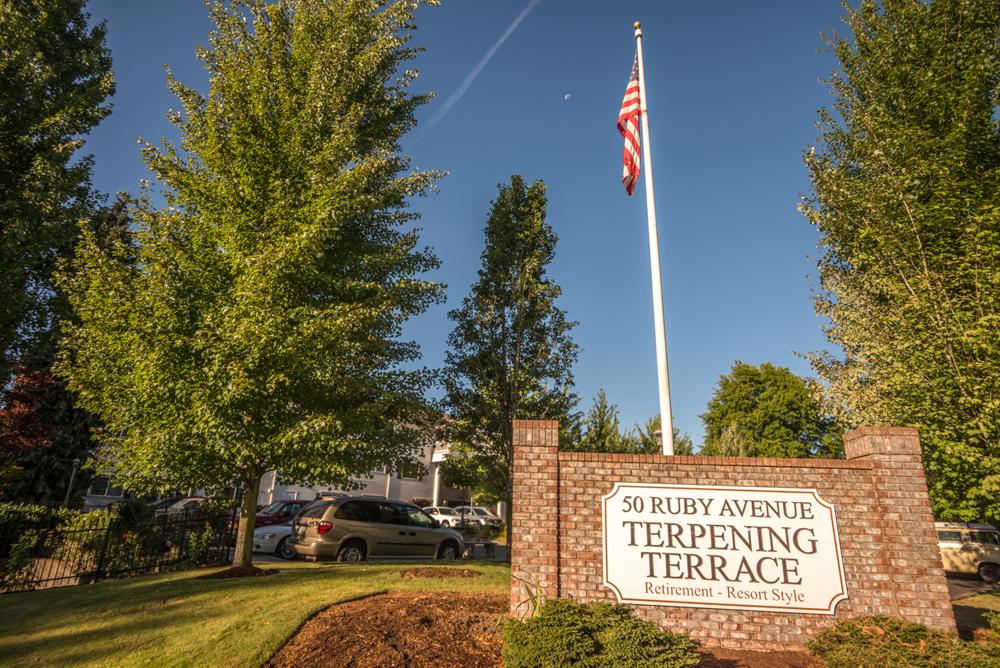 The Terpening family bought the property at 2300 River Road (now the location of Terpening Terrace) in May of 1944 and made it their home. Bill Sr. was an accountant for International Paper, while his wife, Connie, was a very well-respected fifth-grade teacher in the Wendling, McKenzie, Junction City, and Danebo schools. They were a loving family and active citizens in their community. They had two children, Bill Jr. and Robert.

For many years, the Terpening family home, with its well-kept fruit orchards and manicured yard with incredible roses, was a showcase of beauty. Bill Terpening Jr. attended Santa Clara Grade School, Colin Kelly Junior High, and Eugene High, and he graduated from the University of Oregon. His wife, Patsy Conley Terpening, graduated from McKenzie High School and later taught at Danebo and Fairfield Elementary schools in the Bethel District. Bill and Patsy became the Medford area distributors for Mobil Oil in 1964, later B.P., and now 76. They also own Medford Fuel and Pacific Pride in Southern Oregon. They have three daughters and six grandchildren. Referring to Terpening Terrace, Bill states, “As my folks created a showplace here in Eugene years ago, we have created a place that will be a credit to the community.”

Larry and Ann Horton are longtime Oregon residents, with Ann being a native. Her ancestors came over the Oregon Trail to the Harrisburg area by covered wagon in 1852 and 1853 as the Busey and Porter families. They have 5 sons and 11 grandchildren. Three of Larry and Ann’s five sons attended the University of Oregon. Ann grew up working in Lawrence’s jewelry store in Medford, which has been in the family since 1908. Larry is a retired electrical engineer turned retirement community and apartment complex developer. They have ownership in other high-quality retirement communities and several apartment complexes in the Medford area. They enjoy traveling and genealogy. Larry is listed in several who’s who books.

Jack and Debbie Adams are longtime residents of Oregon. Jack moved to Oregon from Pennsylvania with his family when he was 10 years old. Debbie was born in Centralia, IL and has been living in Oregon for the past 28 years. Jack has owned his own business of sharpening and cutting carbide saws for the past 37 years. His business, which is located in Medford, is Cal-Ore Carbide. Debbie worked in banking for 24 years and is now retired. The Adams love to travel, scuba dive, fish, as well as make ceramics and jewelry. Between Jack and Debbie, they have three daughters and one son.

Billy Hogue and Joan Taylor are longtime Oregonians. Billy was born in Oklahoma in 1937 and moved to Oregon with his family when he was 29 years old. He has five children, four in Arizona and one in Oregon. Billy is the owner of Acme West, the construction company that built Terpening Terrace. His company also built Anna Maria Creekside and Horton Plaza, both high-quality, resort-style retirement communities in Medford. Joan was born in Montana and raised as a farmer/ranch girl. She moved to Ashland to raise her two children and has been an Oregonian for 25 years. Joan has been in commercial contracting for many years. Both Billy and Joan can be seen visiting the community and residents frequently.

Ron and Phyllis Grimes take pride in providing comfortable, safe, and secure housing for seniors. Born in Blytheville, AR, Ron moved to Medford, OR in 1957. He graduated from the University of Oregon in 1971 and has been an architect in Medford for the past 25 years. He enjoys ranching horses, hunting, and golf. His wife Phyllis was born and raised in Medford. Phyllis enjoys camping, crafts, and spending time with their grandchildren.